Any thoughts about plastic pitches? I watched Newcastle v Bristol tonight and the game was as shapeless and error-strewn as every game seems to be on these G4 or G5 things. There are quite a few of the things at Sedgley's level. Chester and Preston Grasshoppers, to name two. I know we looked into the thing, then decided against it, and we now have a beautiful grass surface, which promotes a fast, open game, while being safe for the players.

The fate of Worcester shows what happens when 'business' sticks its snout into sport for money reward. I am sure all the past and present owners at Worcester meant well (at some time) but dodgy deals, separate companies owning the ground and club and another one holding the players contracts make a grim mess. If you or I tried to negotiate holding payment to HMRC at that level we would be in court faster than a wing three-quarter.

Look at the mess that is the Premiership in soccer. I still suspect that Ken Bates owns a bit of LUFC, registered in Batavia or Tuvaloo or somewhere.

The comment elsewhere about IMG and cricket. IMG is a 'charitable' organisation designed to make the players / athletes it represents very rich and the IMG owners even ricjer by screwing sports fans all over the world. Since there are plenty of sports fans IMG and the like can bet away with it. They just look for a new set of patsies, sorry fans to screw

Staff member
Yes RL RU cricket soccer golf etc money money money. Elements in RU for so long took a snooty attitude to professionalism and now they have gone over so madly that clubs are closing. (Ironically rather like a number of RL did post 1895 under the new Northern Union).
N

My adopted Premiership club Leicester tigers seem to be finding it more difficult this season and it sounds like they got walloped by Saracens today. I shall have to consider changing my allegiance if they don't buck up. I hope Kevin Sinfield gives them a tough time in training next week.

Nearer to home Leeds Tykes managed a tight win against Chinnor. Two wins already so perhaps this season won't be quite as much of a struggle as last year.

We did have plans to travel to Leeds today but we have a last minute visitor to cater for.

Sedgeley won so someone will be happy.

Another bloody nailbiter, and it was nice to come out on top for once after Essex and Gloucester. Photos okay too. Harrogate won at Huddersfield, Wharfedale lost narrowly to Rotherham.

No game next week, then we're away at Blaydon, before facing Rotherham ourselves in three weeks. Blaydon are having a bit of a nightmare start. I think we're safe from relegation already; but I thought Yorkshire were, too.

Staff member
I’ve finally tested negative for you know what but lack energy and stayed home. Listened to the last 15 mins of Ilkley at Scunthorpe on Drystone Radio! This week we lost it at the death. Our commentator spotted a headbut by a Scunthorpe player behind the ref’s back but touch judges can’t act apparently.

Just checking Ilkley's scores: won 2, lost 3, and every game decided by 7 points or fewer, which is what league rugby is supposed to be about, bringing together teams of similar standard for a cracking good game every week. Unfortunately, West Bridgford had 80 points put on them, at home this time, which is absolutely not what's wanted.

Clearly there are not enough strong clubs to sustain a Regional One North East league (nor a North West one), and there should be a single Regional One North feeding directly into Sedgley's league, as last season with the North Premier, and the east/west split should be one level lower. A bit more travel, much better games.

The coach from Preston Grasshoppers was telling me that it was a huge step up for his young players...and that was then. It will be huger for the Regional winners next year. Scoring 80 points against weak opposition is no preparation for facing Rotherham or Fylde.

Staff member
Indeed all 5 of Ilkley's matches have been on a knife-edge. Exactly what is wanted.

Watched a humdinger of a Colts match today, Sedgley 12-12 Southport. Not hugely skilful, but passionate and exciting, 'bodies on the line' stuff. Real sport.

Staff member
After battling with the RL World Cup Tickets site for ages I have finally booked for the Men's Semi Final at Elland Road. Looking forward to it.

This Saturday is a bit of a rugby desert. Hardly anything on at the recreational level, though Otley v Hull Ionians is an exception, a game brought forward from November 5th, it seems. Big firework event advertised at the club, so perhaps that's the reason. I was surprised to see Otley now field only a 1st XV at adult level. How does that work? A whole bunch of players on loan to local clubs, available when (inevitably) they will be needed?

Sedgley have beaten both of them, but struggled at home to win, in each case. I think it's a tough one to call. I might just go for Otley. I wouldn't expect many tries, either way. Otley's backs looked the sharper. Ionians have now lost two close games on the spin, and we all know what that can do to you.

I could be tempted, either that or watch a Prem game on t' box, more likely. RLWC is a week away. I'm intrigued by Jamaica's presence. Lebanon will all be Sydneysiders, but perhaps they really do play RL in Jamaica? I suspect they won't make the final. 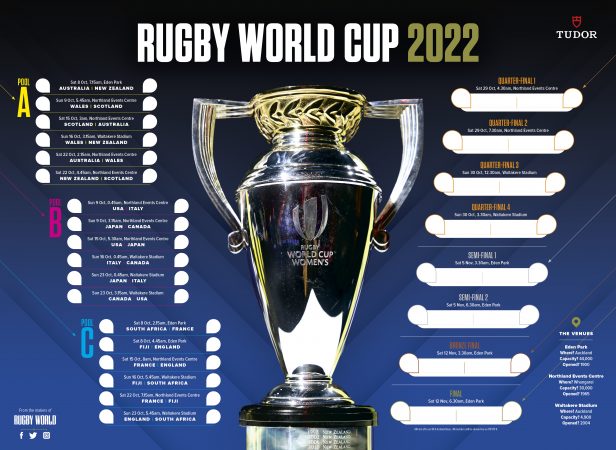 Download Rugby World's Women’s Rugby World Cup 2022 Wallchart for free. Print out our high-res PDF to keep track of all the fixtures and fill in the results

You watch it, Donnylad, and let me know who won, when it's all over.

Staff member
Knew that it was a rest week. Ilkley fans expected in their hundreds to watch the 3rds at Skipton 2nds!

Hadn't realised Otley had changed dates and were playing. I would have gone but have a prior family commitment.

Otley lost 10-15 to Ionians, a low-scoring match between two good defensive teams.
I hadn't realised there was a full programme of matches in the Championship, where Doncaster easily beat Bedford Blues. Ealing are front-runners again, with Jersey also. Donny have lost a couple and are already 10 points back.
N

Ealing and Jersey must be in with a chance of promotion this year as it seems Wasps are following Worcester out of the Premiership.

There could be some very useful cut-price players on the market. I may be wrong, but I don't think there's a pay-cap in the Championship, apart from the obvious one of common sense - the reason I have just bought a 19-plate Suzuki instead of that new Aston Martin I fancied.

I will be watching Sedgley 2s v Caldy 2s on Saturday, while our 1st XV is away at Blaydon. Caldy could be playing Wasps next season, unless they get relegated. Last time I was there, they didn't even have concrete terracing, let alone a stand!

DaveMorton said:
There could be some very useful cut-price players on the market. I may be wrong, but I don't think there's a pay-cap in the Championship, apart from the obvious one of common sense - the reason I have just bought a 19-plate Suzuki instead of that new Aston Martin I fancied.

I will be watching Sedgley 2s v Caldy 2s on Saturday, while our 1st XV is away at Blaydon. Caldy could be playing Wasps next season, unless they get relegated. Last time I was there, they didn't even have concrete terracing, let alone a stand!

Interesting to see and not sure who has the right infrastructure, not to mention the money available, to take a quick punt at reaching the top flight.
Could Coventry become Wasps and use the stadium in their city! Bedford Blues perhaps! not too far away and certainly in Union country.

Back when I were a lad, Coventry were very much English top dogs - players like David Duckham and Fran Cotton (I think) a bit later - and Bedford were always up there, with Northampton and Leicester making the East Midlands a rugby hotbed. Nottingham too, with players like Brian Moore, an England flanker called Rees, and the Scottish Dentist (Gray?), and Rob Andrew, I think.

With the beginning of league rugby (not to be confused with rugby league!) in 1987, then the ending of the Amateur regulations in 1996, some clubs were more prepared than others. The likes of London Welsh, once described as the best club team in the world, were caught out and dropped down the leagues. Wakefield (who had supplied the England captain for the 1987 inaugural World Cup) disappeared completely. So did Rugby, a bit later, conned by a businessman ex-player. they were never exactly a top-table club, but at least they existed...and now they don't.

12 clubs, just 11 games (no home and away for several seasons yet). Leagues had arrived over the dead bodies of many a RU diehard, and there were fears of violent play out of all control. Completely groundless fears, of course.

Staff member
The best outcome in my opinion re Wasps is that they return to London, start again and build up successfully (if they still have a base there), Coventry City AFC became the main tenants of the stadium and Coventry RUFC revive as the sole rugby union side in the city (yes I recall the Duckham days too).
You must log in or register to reply here.
Share:
Facebook Twitter Reddit Pinterest Tumblr WhatsApp Email Share Link
Top